Why continue the E-Scooter trial?

E-Scooters have had their fair share of bad publicity. So, why continue the e-scooter trial? Because it is the only responsible thing for Council to do.

Council debated the question of whether to continue or not with the trial at our last meeting. The debate occurred after receiving a petition and a deputation calling for the trial to cease.

The ensuing debate was a sign, I believe, of this Council maturing. Interestingly, as is so often the case, a Council made up of mainly new members takes at least a term to mature.

Back to the debate and why continue the e-scooter trial. 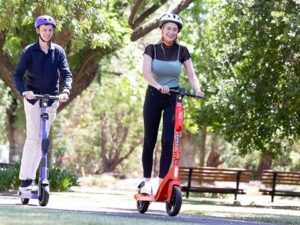 The motion to continue the trial was passed in the affirmative by the smallest of margins, 7 votes to 5. One vote away from being a tie. As a result, the Mayor avoided being called to provide a casting vote.

Every member spoke to the motion. All recognised the concerns that we have heard raised within our community and beyond. Indeed, we all agreed with the concerns raised. The approach therefore to addressing those concerns was where the difference lay.

5 members felt, as did the petitioners, that the concerns warranted not extending the trial. They expressed that they felt there was sufficient data collected to pass on to the State Government to inform them in any future deliberation on legalising the use of e-scooters. On the surface, an understandable approach.

6 members saw an opportunity however in addressing the concerns and looking to alter the management of the trial. They revealed they felt the issues raised need to have solutions tested that will better inform the Government when the time comes for their deliberation.

The concerns and the solutions to address them focused on the use of hire scooters and their operators, Beam and Neuron. In other words, how the “hire scooters” are being used? Issues raised include they are ugly, clogging up our heritage streets. In the same vein, they are being left in appropriate locations at the end of a hire period and therefore are a trip hazard given.

Our staff will address these concerns including by considering having set drop-off locations. This would include providing decals to identify such locations. They will address all issues raised, including liaising with the State Government over concerns that Beam & Neuron do not have adequate insurance cover.

The biggest concern raised by all was the evidence around the country of e-scooters colliding with pedestrians. Most importantly, pedestrian safety should be the focus of concern. An issue we will take up with the Government, with the other participating councils and with Beam and Neuron.

I approached the debate and the vote in a different way. I guess this made my vote the critical one.

My vision of e-scooters goes way beyond what the debate focused on. I see a future where e-scooters are but one of many alternate means of short-distance transport. Transport for the inner suburban local government areas. Both transport to and from the city but within each local government area. Transport, in Unley’s case connecting east and west.

It is what, I believe, our future generations will demand. An ecological solution indeed that our current generation is demanding.

More importantly, I see a future dominated by private ownership, not the Beam, Neuron hire scooters being used in the trial. A future where e-scooters, e-bikes, Segways, who knows what else that is yet to evolve, and (of course Bicycles) are favoured over cars for shorter trips.

I believe the trial needs to continue to provide data that will help frame better laws around the use of all these vehicle types. Most importantly around rider and pedestrian safety.

Better laws too, therefore, to protect pedestrians from traditional bicycle riders. I say this because all the trial has achieved so far is to identify the issue that exists, but only with e-scooters. This is wrong and unfairly focused on the scooters.

Yes! I voted to see this trial provide better laws governing the use of all these potential transport options. Transport options that, in addition, include that which is legal now and which creates similar hazards. And that means addressing the concerns over e-scooter/pedestrian collisions.

I look forward to providing the Government with this data. It will be satisfying should our trial help frame laws that will address all that I have written here.