Millswood on the World Stage.

The Millswood Croquet Club, a small club nestled quietly and neatly away form view of the world in in suburban Millswood, is about to co-host a world event.

Adelaide is the host city for the 13th WCF AC World Championships in Adelaide from April 28th to May 6th, 2012. And yes, little ol’ Millswood will be one of the host venues.

The Championship will be a spectacular event. The top 80 World-ranked players from 24 countries will compete for the title of World Champion. The Championship is held every 2 years and is the most prestigious event on the World Croquet Calendar. So we about to witness what must be seen as a once in a lifetime event. 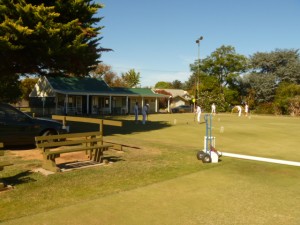 Croquet, especially in Australia, is the quiet achiever in the sporting world. Fiercely competitive, we are the largest croquet playing nation in the world with 8000 players. Croquet is a totally non-sexist and non-ageist sport and the game itself has been likened to a mixture of snooker and chess on grass.
Australia has a proud history of producing champions and this event will see the cream of the Australian croquet community turn out to fight it out with the very best including current champion Reg Bamford from South Africa for the right to be named The World Champion.
Spectators from all over the world plus a strong contingent from Australia will converge on Adelaide for this very special event, with the final being streamed live on the internet for the world-wide croquet community.
I am proud to have played a small part in preparing the club for this tournament. One of the first things I did early last year as a councillor for the Goodwood South Ward of the Unley Council was to ensure the club received assistance from Council to make some important renovations to a very quaint clubroom. We all would have been embarrassed to leave it as it was.