Addison Road is safe from invasion of rat running traffic.

Like I have encouraged you, I recently visited one of the many current public sessions put on by DIT. As a result, my fears of traffic issues in Black Forest have been allayed.

This means Addison Road is safe from the invasion 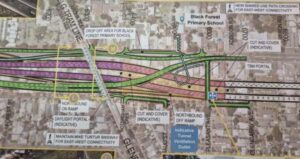 of rat-running traffic. So too is Coulter Avenue and other adjacent streets.

DIT was constantly challenged by the question of east-west connectivity. Particularly the connection of Glandore residents to the Black Forest Primary School.

The current reference design goes a long way to addressing this.

Thankfully the concerns I had that it may have created traffic issues around Addison Road appear unfounded. An examination of the layout provided at the public screening provided an improved understanding of what they have done to provide connectivity.

What was not obvious on their website was that they have created a two-way single-lane access from Glengarry Avenue, through Pleasant Avenue to the at-grade South Road. Right-hand turning is NOT possible at that intersection. This means Addison Road has been saved from the increase in traffic I was expecting from this direction.

On the other hand, Black Forest residents will be able to head south from Addison Road etc on South Road. Southbound traffic will also be able to enter Addison Road, as they can now. They will not (in reverse to Glandore) turn right into or from South Road out of Addison Road.

While Addison Road is safe from the invasion of rat-running traffic, I will be interested to see traffic flow modelling to understand better where traffic is likely to be diverted. Just in case there are other issues I have not contemplated.