To the chagrin of aggrieved residents the Goodwood Saints Football Club this week successfully applied to have an extension of light use at Goodwood Oval for training and for night matches.

Their application was heard and unanimously approved by the Council Assessment Panel (CAP). 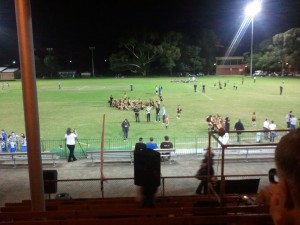 The CAP is a body constituted under the Development Act. It has 4 independent members and 1 elected member. It hears and makes planning decisions on behalf of Council. Council’s elected body has no involvement in this process and is not able to impact on their decisions.

Residents and others, as required under the Act, made representations to the panel. 150 of them. 77 in favour and 73 against. 9 Aggrieved Residents backed up their written representations verbally on the night.

I am proud of my neighbours. They presented well and focused on planning issues. This is important as the Panel Members must make their decisions based on Planning principles.

I am proud too of the Panel Members. Their individual explanations indicated their interpretation of planning formed their respective opinions. This even though their opinion differed from the Residents.

With the decision favouring the Club, aggrieved residents may consider lodging an appeal. The ERD Court would hear any such appeal. Anyone considering appealing have 14 days to consider this.

I say aggrieved because they (the residents) feel the club is, by way of bracket creep, eating into their use of the facility and intrusion into their amenity.

These aggrieved residents unfortunately are now catching a double dose of aggravation with a section of the media choosing to pass judgement without knowing the facts.

Two Radio stations that I am aware of have covered this storey. Unfortunately however, news is littered with half-truths, myths and prejudices. Accordingly this compounds the agony for these residents.

One station chose to run an anti-resident campaign holding themselves up as knowing the facts. The other radio station researched the storey and the facts and covered it accordingly.

The first radio station focused on the right of girls to be able to play at the same venue as their brothers. It is quite appropriate to argue that case and I support that.

Their lack of research meant they failed however to even attempt to understand what the residents’ concerns were. Accordingly they ignored concerns that included extending the grief they already experience with illegal parking and not being able to access their driveways. The Oval being restricted to 2 nights a week was conveniently ignored.  And other like issues and I do not support that.

What they did was to ignore these very important issues. I guess this may be because they did not bother to research it.

They focused on the observation of just one resident. One of 73.

The Radio Station simply argued that lights will be turned off before bed time, or covered with a blind. So what’s the problem was their focus. Never mind noise and anti-social behaviour etc even though the Club acknowledges this.

They failed to check that the Oval is already being overused, even though the Club acknowledges this.

Any extension of the use by the club not only eats into the time they (the residents) might have access, but potentially makes the Oval unfit for the remaining access time they may have.

The other station understood this and reported accurately and without opinion.

For all that, Council has a responsibility.

The issues raised in this blog are issues that Council will have to manage, along with the Club and the residents.

We will. We already are. Let’s face it, it is our responsibility. The Club has confirmed publically that it has a responsibility too. Accordingly we should be able to work with them to address the concerns of their neighbours.

Watch for future blogs to see what we are doing.