Another Successful Event for Unley 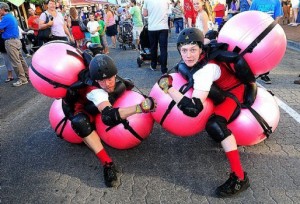 For the eleventh year in a row the Unley Gourmet Gala hit the road at 4pm on Wednesday January 18, 2012 featuring an even greater focus on cycling events and was a wonderful prelude to the Santos Tour Down Under Stage Three Start.
Held on King William Road on the eve of the grueling 134km journey from Unley to Victor Harbor, the Unley Gourmet Gala is one of Adelaide’s most prestigious events, showcasing South Australia’s finest local food and wine, fashion, music and entertainment.
For 2012 a major highlight was the Unley Cycling Challenge which included the Cycling SA graded Criteriums, the Rendition Homes Cycling Series and the Santos Women’s Cup series, which attracted the cream of South Australia’s top women riders as they competed in a short-course Criterium race on streets of Hyde Park.
Other cycling events to complement the gourmet and fashion attractions of Unley Gourmet Gala included the Exactitude bike trials demonstration – where riders successfully negotiated either man-made or natural obstacles without putting a foot down.
A Cycling and Bike Hub, on the corner of and , featured bicycle product displays and demonstrations, with children’s cycling safety activities at Ride-A-Bike-Right.
Mayor Lachlan Clyne said; “I really enjoyed the Unley Cycling Challenge which was exciting for spectators and riders alike”
“The racing was a great opening event for what was the best Unley Gourmet Gala we’ve seen yet, supported by record sponsorship this year from local businesses.”
Star TV chefs Poh Ling Yeoh and Simon Bryant headlined this year’s gourmet event. Simon, who starred in the ABC’s The Cook and Chef series, and Poh, star of Poh’s Kitchen, teamed up to provide cooking demonstrations compared by renowned radio presenter and columnist Amanda Blair.
“It was a great opportunity to get up close and personal with two of ’s most popular celebrity chefs,” Mayor Clyne said. “They were a huge attraction.”
“This is the second year Simon has been a key part of Unley Gourmet Gala, which is a great showcase for our local restaurants and food and wine businesses. As well as celebrating Unley’s contribution to the Santos Tour Down Under, it’s also about making sure visitors enjoy their time here and return to Unley in the future.”
Chef Poh Ling said “I love the whole Tour Down Under as it attracts so many international visitors to and turns the city into such a cosmopolitan place.
It provides the perfect opportunity to share the wine and food of our State with the world.”
Children’s variety show The Amazing Drumming Monkeys headed up the list of kids’ entertainment, which again included Kinderchef and Theatrebugs, along with cycling-themed children’s art provided by Little Picassos and face painting.
Other entertainment included popular bands Blue Note Seven and Mr Goodnight performing at Unley Gourmet Gala for the first time, while The Shizzle and Lesley Williams from The Attack returned by popular demand.
Fashion parades, hosted by the Seven Network Today Tonight South Australia presenter Rosanna Mangiarelli, once again showcased the best of Unley’s fashion boutiques.
Unley Council’s CEO, Peter Tsokas said “Despite all the stories about retail doom and gloom, Unley traders have dug even deeper this year and exceeded our sponsorship target by more than $10,000.”
“Their contribution both in cash and in kind now accounts for over a third of the total Unley Gourmet Gala budget which now exceeds $250,000, making it one of Adelaide’s most prestigious events showcasing South Australia’s finest local food and wine, fashion, music and entertainment.”
Mr Tsokas also welcomed new sponsors who this year included Bank of , Norman Waterhouse Lawyers, Un Caffe Bar and the McLaren Vale Beer Company.
“I would also like to especially thank continuing sponsors who include Miele, Tomich Wines, Rawson’s Elite Appliances, the King William Road Trader’s Association along with other contributors for their ongoing support,”
“Their support, at a time that is generally acknowledged to be tough for retail business across , demonstrates their continued confidence in Unley as a business location and especially King William Road as an attractive retail hub.
Major sponsors of the event were Toop & Toop, Tomich Wines, Duke Group of Companies, Balfours, Wavals Party Hire, Pride Models, and Enve Hair and Makeup.