Community & Council working together in Millswood Concerns by some residents expressed recently to my co councillor Jennie Boisvert prompted a “street” meeting, or perhaps I should say an “oval” meeting.

A group of around 20 people responded to an invitation to attend the meeting called to address the issues raised. Jennie and I, along with council’s manager of traffic and transport, Charles Mountain, talked with residents about a number of issues of concern to some of them.

Concerns around parking on match days on the south side of Goodwood Oval (in Fairfax & Graham Streets), was accepted by the majority as one of the prices to pay when living next door to an oval. Other issues raised however warrant Council looking into and addressing.

Fencing at the south west corner of the oval, whilst included in our current year’s budget, has yet to be erected. Discussions on this revealed it is a good idea we check what type of fence is being considered as there were concerns regarding the safety of children. Jennie and I will follow this up. 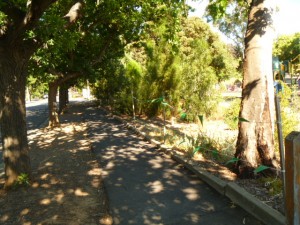 The fence is yet to be erected – watch this space
﻿

A number of issues were also raised by residents of Graham Avenue. All these issues are worthy of Council responding to and we will.

It was good to part of a very productive meeting and I thank the residents who participated.