At a best guess I would say 500 people came and had a look at what information was available and to offer comment on what they thought good and/or bad about the various projects. DPTI had a swag of people there to answer questions, as did Council relative to the Brownhill Creek diversion and the redevelopment of Forestville Reserve.

Many issues concerning final design where answered, for me at least. In particular and concentrating here on just one, I was pleased to see that the electrification structure for the majority of the line would be a two pole cantilever structure rather than the Portal or Gantry style structure that DPTI had been using in all their promotions.

The Portal or Gantry structure will only be needed wherever there are 3 or more tracks, which essentially is north of Goodwood Junction. South of there, in other words south of Fairfax Street, the structure for the majority of the line, including beyond Unley’s boundaries, will be as below, two posts with a single cantilever on each post. 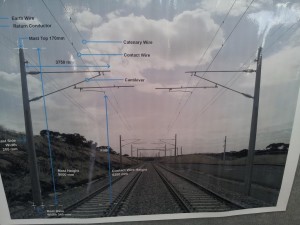 It is possible that some sections of the line, where it is possible to achieve it, that single posts with double cantilevers might be used. I have asked a DPTI representative to confirm whether this is possible along the Cromer Parade section and separately between Clarence Park Station and Emerson Station.

When I get the information I will pass it on.