DPTI’s past dealings a legacy for the future As the rail revitalisation through the City of Unley moves to its next phase, mast installation, communication with the residents about keeping a n environment they would wish to live in has become harder.

A marathon meeting with local residents in Cowper Road Black Forest a couple of weeks ago (as I posted at the time) I thought was a very positive meeting and the man charged by DPTI I believe was receptive, unlike his predecessors, to the needs of the residents. Council’s senior staff attended the same meeting and confirmed my long held position that the best possible solution must be sought for the residents.

The next phase which is mast installation is about to commence. Coupled with this in one area at least will be lighting for the greenways bike path that has taken over part of the corridor. Likewise re vegetation (which council is taking on with DPTI being responsible for cost) can then proceed.

We had an undertaking that the final location of masts, which will be non negotiable after DPTI has taken all issues impacting on the location of each mast into consideration, would be available last Friday. We still await this and this holds up the on site progress because nothing can proceed until this is obtained.

Trouble is there is evidence of workers wanting to proceed, clearly with documentation that is not final. It appears that the man now in charge has yet to have the whole construction team on side. Must be hard for him right now. But that is DPTI from my experience. 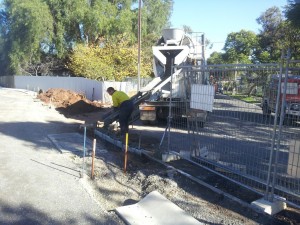 Of course the residents have reached a point from many previous negotiations with DPTI where the do not trust what is being promised right now. So much so the Minister is now involved.

This history they are struggling to shred which is a shame because I believe a solution is forthcoming that will provide them a result that should work for them.

I understand he (the hon. Tom Koutsantonis)  has met with some of the residents already and will be meeting again on site this coming weekend.

His involvement, along with concessions I believe DPTI are making (based on conversations I have had behind the scenes), I believe will see a good result.

What I can also say is, where Council has an involvement or a say in the end result, we WILL BE, working for a solution that addresses the residents true needs. And Council officers and elected members are on the same page, something that appears not to be the case on North Terrace.