Stormwater management remains the Elephant in the Room

As Council progresses several initiatives in the near future, stormwater management remains the Elephant in the Room.

As we have steadily upgraded facilities during my time on Council. While we have been seeking to resolve the loss of tree canopy in our area. Likewise developing a zero-carbon world. The elephant in the room has been stormwater management.

Stormwater has been lying (literally) just beneath the surface. Until of course we have a flooding event. And we out in the west of Unley experience that often enough. I am keen to ensure that we place a priority on addressing stormwater management.

The impact of heavy rain events has been a concern of mine for some time now. I have regularly attended hot spots and liaised with our admin during an event. In addition to this, I have advocated that we need to plan now for stormwater mitigation.

It is great to see the most visible of our achievements since I joined Council. The sporting facilities that have now have changed from some of the worst to some of the best in South Australia. It is great that we are advancing tree canopy & zero-carbon initiatives.

Stormwater is one of those core Council responsibilities. Not visible like roads and footpaths etc. But as important. 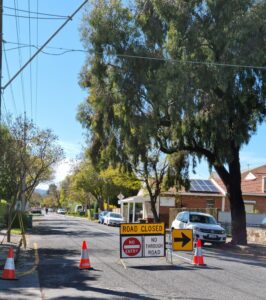 With climate change, its importance will become more noticeable. While rainfall is predicted to lessen, climate change experts predict that rain events are expected to be more impactful and severe.  If this is to be achieved, we know we must improve our drainage

So! This financial year we will (starting today), as part of a road improvement project, upgrade the stormwater under Mills Street, Clarence Park. Next Tuesday we will see things get serious with the pace picking up.

This will address frequent public flooding at the corner of Mills Street and East Avenue. This work should have commenced already. Watch out. It may be next week.

This year will also see issues in Wilson Street at Black Forest solved. We have likewise budgeted in this financial year to design and construct improvements in Hammond Street Clarence Park. This years budget includes design only of improvements to the stormwater drainage around Homer Road Clarence Park. Next years financial budget includes construction for Homer Road, completing the cycle.

On our part at least. The ultimate solution requires the involvement of the Government and the Department of Infrastructure and Transport (DIT). Because our stormwater must be directed west, the elephant in the room now becomes how we direct our stormwater through their yet to be constructed north-south corridor. The north-south corridor tunnel is a barrier that must be bridged.

I have pointed this out to the DIT reference group. I did this because I am concerned that it is not being given sufficient consideration by the team at DIT. That is another storey however on which I have already blogged, at least once.